As I watched my dear friends say their vows, uncontrollable tears fell silently down my face, I beamed with all the love inside me for these two  humans who have loved each other for over two decades.

For me this was the culmination of the Marriage Equality Campaign in Australia, this is the right the LGBTQI population won with quiet dignity and   determination in the face of almost forgotten discrimination and homophobia.

I ignorantly believed the High Court of Australia would decide the non compulsory plebiscite proposed by the government, would be discrimination against a minority group, and parliament would have to vote it out behind closed doors.

How wrong I was.

Our youth had learned at schools and from their loved ones that it was ok to be gay were suddenly told by some of the most prominent people in the country that they were second rate humans who had no right to love. Our LGBT elders went through so much so our youth did not have to suffer, yet in horror we watched our cultural safety unravel.

In Sydney, a plane wrote “Vote No” across our sky, gay parents took their children indoors and tears and outrage was shared across our community and shared on social media. Vote No advertisements appeared on television, in newspapers. There was nowhere to escape to. 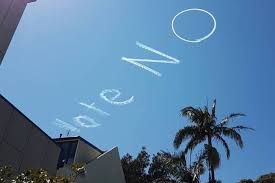 Many religious groups preached hate and fear and homophobia, until they were silenced by the anti-discrimination and anti-vilification laws – suddenly they felt gagged and bullied. The irony was not lost on anyone.

Most people do not want to protest, I personally do not like it, but we were forced as a community to walk together to demand the right to love. I wasn’t sure how many people would march that day, all I knew was I had to march with my loved ones, didn’t matter if there was 300 or 3,000 we had to march.

As I left my apartment building that day, I watched  people of my community  wearing their Vote Yes shirts and rainbow flags walk with quiet dignity towards the city.

30,000 people from our community felt the same way, the rally began at Sydney Town Hall, the city streets surrounding the town hall was also packed, the atmosphere was calm. We walked as one, quietly and with love. To date we were the largest protest in Australia’s history.

Major protests were held in every capital city in the country.

Australia voted yes, and we had won.

It is taking time to forgive, as I write this post, the memory still makes me emotional. And quietly angry.

It was a joy to watch my dear friends marry, it is the first of many weddings to follow over the next twelve months as our loved ones legally declare their love for each other.I hope I cry at every singly wedding, I personally fought for the right to! 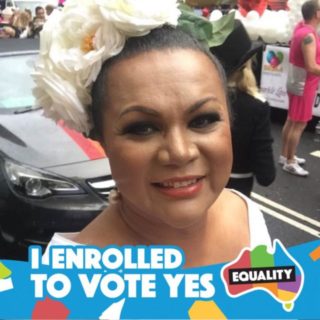