Across Australia corporations and schools have adopted Wear It Purple Day – the last Friday in August, as a day to wear purple and have fun and at the same time to help silently showing support for rainbow youth in schools by wearing purple.

Corporations will often raise money on that day for their favourite LGBTI Charities and have breakfasts, lunches, morning and afternoon teas or evening events with guest speakers from LGBTI Communities.

Wear It Purple Day is a very busy time for me, I think because of my past involvement and now as a former Board Member, I am often invited to speak at such events.

But my favourite is speaking at Sydney Secondary College – Black Wattle Bay, Sydney Inner West’s Enormous Senior School Campus. I was invited back to speak at the request of the Student Representative Council, who wanted a transgender speaker to show support for the transgender students attending their school.

It is an honour and pleasure to speak at a School Assembly, one must be very careful of how we address young adults and the message needs to resonate with all the students yet most importantly the message must be able to comfort and empower the rainbow young people, Wear It Purple Day is their day after all. I also have a responsibility of care to not use language that could be perceived as indoctrination.

My name is Katherine Wolfgramme and I am so honoured to be invited back to speak with you today, some of you will remember me from last year, it was such a joy and honour for me to come and speak and see you all in purple, wearing purple to show all the rainbow students here that they are not alone.
I am The Ambassador of The Gender Centre, we support the needs of all transgender people of all ages and their families in NSW, we are oldest transgender organisation in the world, I have recently stepped down from Wear It Purple, I was the first transgender person on their Board, I stepped down so I could join The Board at Sydney Gay & Lesbian Mardi Gras – which is a lot of hard work!
The Student Representative Council specifically asked Mr Pascoe to find a transgender keynote speaker to help support all the transgender students here at Blackwattle Bay, and on behalf of all trans people I would like to thank the SRC for being so inclusive and thoughtful to your fellow students.
Feeling alone is a strange emotion, we can easily feel all alone in a crowded room, often that type of aloneness is caused because we feel like the “only one”, I used to feel alone, I am 48 years old, I knew I was a woman inside when I was five, but nobody believed me. I was alone.
At primary school children knew I was different and would not play with me, things were very different then, we were just coming out of The White Australia Policy and I was the only black child at school, and when I was 9 everyone started teasing me and call me gay, there was no word for trans.. and black.. I was alone.
Being bullied was a very normal part of my school week, and I was only safe at home
In high school the safest place for me away from bullies was the school library, I would go straight there at lunchtime and be a library monitor.
When I turned 16 things changed, I met an exchange student who had just arrived from Sweden, Anna didn’t see colour and she didn’t see gay, she just saw me. And all the toughest boys at school thought she was hot, and all the prettiest girls at school wanted to be friends with her so the boys would think them hot too.. my life changed, for the boys to find out where the girls would be on the weekend the boys had to ask me… it was also my very first taste of power.
So, needless to say the bullying stopped,  at that time I looked like a boy but I was so feminine and so gentle, there was no such thing as trans in those days, so people would just call me Fag, or Poof or any of those terrible words, of course everyone outside of school still teased me but at least I was safe at school.
But I still felt alone, because I  was a woman inside, yet I was not allowed to be me, I was not allowed be Katherine – on the outside at least..
As soon as I turned 18 I transitioned and I have only felt happiness towards myself ever since, the world in those days was not so accepting, everyone, and I mean everyone even strangers thought that I should be ashamed of myself, which made me so unhappy – but that unhappiness was environmental, within myself I was happy because I was whole.

I wanted to share that story with you because I wanted all of you to know that growing up is tough, it isn’t easy trying to fit in and trying to find your space in the world.
But for LGBT kids life is even tougher, and to see you all wear purple today for your Rainbow school friends makes me so proud of you, it makes me so proud of all of you.
I wish I had a Wear It Purple Day growing up, I would never have felt so unsupported or alone.
I changed the law in one country, and I changed language in another, I do love saying that, it makes me feel so…..goood, but I did.
I was born in Fiji in 1972, arrived in Australia in 1974 and I transitioned in 1990, in 1997 I wanted to travel the world with my boyfriend. But to change my name on my passport in Australia I had to change my name on my birth certificate in Fiji.. Fiji was a very strict Christian country and this request to them was outrageous, I kept asking and they kept saying no, I was young so it was easy for me to ask the same question a thousand ways, but a thousand times they said no, I kept on, and as people started getting exhausted, I started speaking to people higher up the chain. I pointed out that I would not be safe to travel under a boys name looking like a beautiful woman, terrible things could happen to me in other countries and they had a duty to my safety, eventually after months of nagging people started listening.
So I flew to Fiji hired Lawyers and won the right to legally be called Katherine on my birth certificate, passport and all legal documents thereby creating precedent for all other transgender people to access after me.
In 2017, there was a word that began with T that men would use to degrade and debase mainly young transgender women, it used to be a harmless abbreviation or slang for Transgender but in the wrong hands became a transphobic slur, I could not allow young trans women to be called this when the majority of these young women made it very clear they hated the word.
So I took legal action against all businesses in the ACT and NSW who used the word publicly to cease and desist, not necessarily because the businesses meant harm but because the businesses were inadvertently giving transphobic people  permission to use the slur – because transphobic people thought it was normal and acceptable to talk like that.
Within three months all businesses complied, not just in NSW but right across the country.
There is no longer any doubt that word is wrong and is no longer used in polite conversation.
Pretty cool heh?

On a final note, I have come with a message to all the people in this room who feel alone because they are different.
“Another word for different is Unique, unique people grow up to be outstanding humans who sometimes do outstanding things”
One day, you may go on to change laws, or  change language or enhance the world in a positive way.
Until that day comes, hold tight be strong and remember – you are not alone today.
Because today we are all wearing Purple for you!!
When you see people wearing purple clothes today remember they are wearing something purple to silently let you know that even though you don’t know us, we see you, we love you,  we stand with you, we stand by you, and when we can, we are standing up for you, so your life will be easier than ours was.

Thank you so much for asking me to return to speak with you, I will always be so happy to return.
I wish one and all a Happy Wear It Purple Day. Thank you. 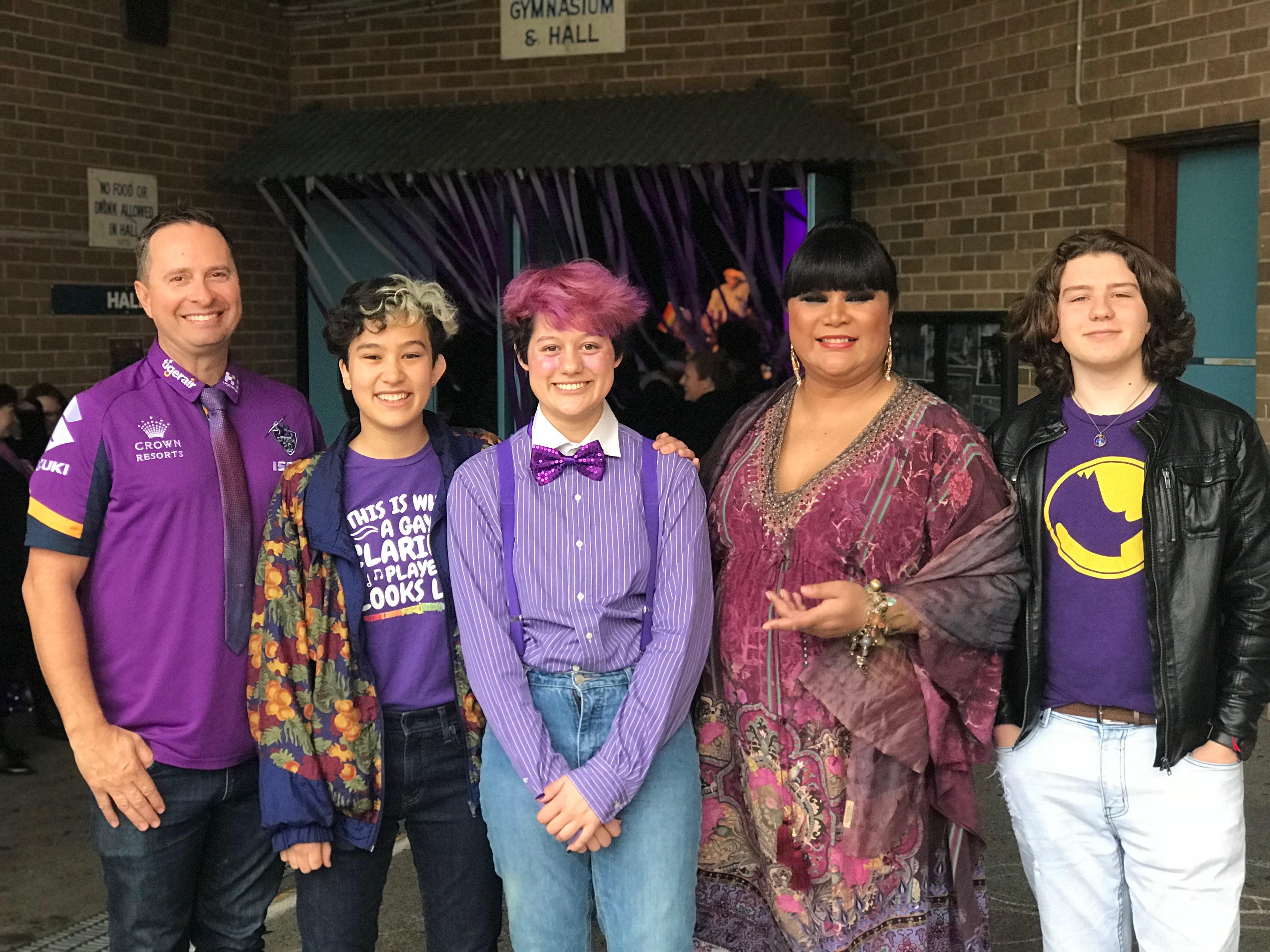 As a former Board Member of Wear It Purple, it seems I still remain a part of the Wear It Purple family, and our future seems to be intertwined, I will always heed their call when they request things of me such as the Junkee Media film clip I was in with Billie Ward, which has now gone viral with over 200,000 views on Facebook!

Here is the link to the Facebook video: https://www.facebook.com/junkeedotcom/videos/390972474947400/UzpfSTU4MDY3NjE3MzoxMDE1NjI0NzMwMDcyNjE3NA/

And here is the link the Junkee Media article with more information about the film: https://junkee.com/wear-it-purple-day/220009